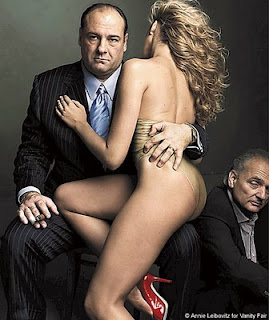 The other day, after spending some time on my pages, the balance of power between my characters loomed large. Starting with the grandmother character, trickling down through my narrator, via her mother, and then onto my narrator’s niece. My novel is a study in matriarchy. The men in my novel are “shadowy extras on the set” which is the actual descriptor early on. This is a family where the men lope behind the women like pets. They are expendable and mostly badly behaved. This is exemplified in the opening scene, in which a male forebear commits a murder/suicide—a definitive statement from which the tale unfurls.

Dizzy with words and characters and plot points, off I went to the gym, headphones in pocket. On the elliptical machine, there in front of me on telly one, was Tony and gang. Commensurate with my state of mind, this was one of the quintessential power-shift episodes, the one where Little Anthony gets in trouble for being drunk in gym class and is consigned to the school counselor to rule out ADD.

The undercurrent is in backstory, where we learn the root of Tony’s ensuing existential crisis: his first awareness of the family “business.” This is juxtaposed with his own decision to reveal or not reveal the nature of his livelihood to his own kids, and the confession of his philandering ways to his shrink.

The one scene in Melfi’s office unveils, in my mind, the core of the success of this show. There is this stunning confrontation between Melfi and Tony, a standoff of psyches, on the heels of a session where Tony revealed his “love” read: transference, for his therapist. Tony’s need to balm his vulnerability with face-saving machismo is so wonderfully, classically, hyperbolically male. Melfi’s retreat into professional stance when she is clearly intrigued by her patient, is played on the edge. The chemistry between these two characters comes up against their sense of control and power and hunger for winning. It’s everything I want to explore in my work, and left me feeling drained and excited all at the same time.