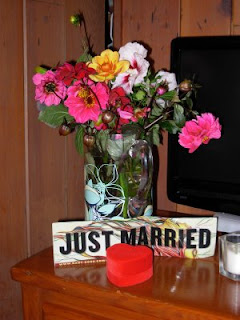 We interrupt The Secret to Love to cough up a real secret. And, btw, real love. Well, okay, it's not much of a secret anymore—but the love part is big and fat and real. Saturday October 4th, the writer formerly known as Suzy Vitello got hitched to her love of one-year-and-ten-months: Kirk Soulé. Though not exactly "Page 6," this union is definitely on the short list of my Biggest Dreams Ever, and I'm abandoning my fictional persona for this particular blog post in favor of genuine, gushing, sappy and satisfying reportage.

The scoop, for those of you who may be somewhat interested in tmi, is:

I met Kirk in December of 2006, via match.com, after being divorced for 6 months. As cliché as internet dating sounds, for a person attracted by voice, the platform works—despite being fraught with heroic journey-sized pratfalls. Know that old adage about kissing a lot of frogs? Okay, okay, I didn't do all that much kissing. I did enough, though. Enough to know swoon-worthy lips when I meet 'em.

We courted, dated, danced and adventured our way into each other's worlds over the next year. For a high school science teacher who claims not to be a writer, Kirk has more natural ability with words and language than most people who hang wordsmithing shingles. He and I were together on the holiday that inspired STL, and it's he, more than anyone else who has encouraged me to keep chipping through the draft. He's the "devoted husband" you hear thanked by every woman who ever met with formal artistic success.

Kirk's the first keeper of my life, funny, sexy and bursting with humanity, passion and creativity. He's my best friend. Okay, yeah, I did have to (gulp) write the number "3" in the "what number marriage is this" section of the license, and that is a humbling thing to have to jot. But it's not like I'm Britney Spears.

So the wedding itself was perfect. The elopement, I mean. We decided a month and a half ago the where and when. Obviously not only was it too late to pull off a formal vows and rings ceremony with guests and floral representation and attendants in organza, but given that Kirk's son just married, it would be in bad taste to belly up to the altar this fall, not to mention expensive.

So we called upon an old friend of Kirk's, who happens to be a judge, and our wonderful neighbors-turned-witnesses, and at the last minute I broke down and hired a photographer because it's a wonderful thing to have an objective creative professional about at a time like this. Not to mention, I was counting on the possibility of a really good hair day and the rarity of that must be immortalized.

So we scurried up the mt. to Timberline Lodge where we spent the night in one of their charming castle-esque rooms replete with heavy paneling, massive hardware and outstanding views of Mt. Hood. Well, the view would have been outstanding had the visibility been more than three feet.

We got married in a downpour that a few hours later turned into the first sleet storm of the season. Our amenable judge, his gracious wife, our sporting neighbors and the graphic chronicler of our union joined us out in the rain, under various umbrellas, for the off-the-grid celebration of our life-long commitment. It was the most present, correctly scaled event of my entire life. (With the possible exception of the birth of my third child which occurred under the influence of god's best invention, the epidural.)

In the spirit of unbridaled (sp intentional) narcissism, feel free to view the nuptials for yourself. This guy totally captured the spirit of the day. (Once on the home page, select the client login and put this password in the user box: 100408wedding ).

We appropriated a small alcove in one of the more public parts of the lodge, employed a couple of small tables upon which to lay our cupcakes, plugged in the ipod, bought some champagne from the bar, and, et voila: we had ourselves an actual reception.

All in all, it was the best wedding I've ever had. And I'm looking forward to the marriage following suit.

I have to go be a newlywed now, but stay tuned for more secrets to love!