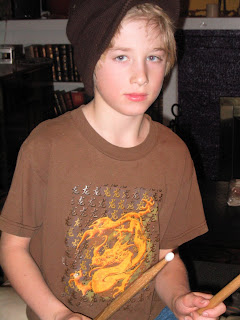 There was a dry spell at work today, so I did a rain dance. Went to a matinee and saw Juno. It worked, came back to the office and hydroplaned through client emails. Luckily, I’d already done my writing for the day, so all those word chunks dislodged while in the darkened theater will have to compost overnight.

The movie was very good, but I must admit, it took me a while to suspend disbelief and go with the farcical dialogue. No sixteen year old sounds like that, has that sort of dry wit and acid-tongued machine-gun-fire retortability. At first, I thought the script too pleased with itself. Too clever. But the girl (played by the very talented Ellen Page) won me over in the end. Once the story got to climax the character showed, at last, the sort of vulnerability I was hoping for—not sentimentality, vulnerability.

I was once a child, and I’m 70% done raising my brood of three. Look, there’s my littlest. He’s 8 and still innocently goofy, but getting hipper by the day. The hat. The skater hair. The drum sticks.

In art, I’m a fan of the adultified, precocious kid ala Peanuts, but as a real parent, I’m decidedly not. My two older kids I tossed into the Waldorf School to assuage the effects of premature sophistication, the media-inspired onslaught and the tendency of public education to thwart critical thinking. Turned out the Steiner disciples my children got were not exactly free-thinkers who encouraged questioning minds. True, my kids were spared the uninterrupted barrage of commercialized drivel during the Waldorf years, but they were subjected to a different shade of fascism: cultish adherence to the tenets of a man who was born a century before neuro-scientists got a really good peek at the brain. Dyslexia, for instance, was explained as a stage afflicted children would transcend once the long bones matured. Okay, maybe it wasn’t that simplistic, but the shrugged shoulders and head nodding still irks me when I remember the way parents with learning disabled kids were dismissed.

So, when it comes to romanticizing childhood, I guess I’m selectively cynical. I don’t buy that childhood is only pure if a kid is dressed in woolens and brings a hand woven basket of homemade bread to school each day—aesthetically it’s a nice thought, but, some days I’m really glad that God invented juice boxes and Ziploc storage bags.

On the other hand, if teenagers really were sophisticated enough to expound, convincingly, on the nuances of punk rock that was produced a decade before their birth, I’d be scared.
Posted by Suzy Vitello at 9:25 PM