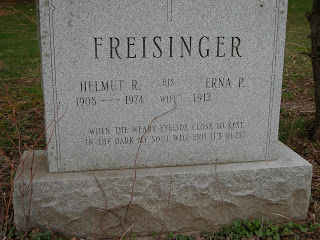 Just completed a whirlwind trip home for my father's 70th bday. I get back there (Warwick, NY—a smallish upstate town) every year or so, and with each passing visit I feel a diminished claim. There is, of course, the idyll. Warwick is beautiful in that pastoral, rolling hills way. But I feel no kindred connection to the populous. Aside from my family and an ever decreasing pool of friends there, the townsfolk seem displaced to me. As if they were newly minted plastic figures set out on my father's boyhood train set. The Brooklyn accents, the suburban mannerisms and pushiness—it all feels odd and wrong and not how I remember it.

I fielded the usual queries: will you always live in oray-GHAN? Do you think your kids will ever move back East? Don't you miss Warwick???

Steeped in the nostalgia brought on from a father's significant birthday, we rolled up to the high edge of the cemetery, where my grandfather is buried and where his wife's name and birthdate awaits the final inscription (she's nearly 96 and in a nursing home). I had not been to "the grave" in years, though I think of my Opa often. Much to my surprise, I noticed a flaw in the epitaph punctuation. Apparently nobody ever proofed the tombstone. I felt snotty and mean bringing up the mistake (an apostrophe in the possessive its), but I couldn't help myself. It sort of sealed the deal for me, this little thing. As if something like this could never happen in the much-hipper city in which I reside.

Warwick is a lovely town. Though provincial and quaint and full now of transplants, I couldn't have picked a better place to wander through adolescence. It's just that I realize now my ruby red slippers are appointed with moss, fern bits and mud instead of oak leaves and lightning bugs. I'm in the Newark airport Marriott at the moment, decompressing and about to suck down a vodka and cranberry from the bar. I'll toast to the East Coast, but I can't wait to see my snow-capped peaks, lie in my native Oregonian boyfriend's embrace, and wake up to the sound of rain plinking my gutters.