Liars, cheaters and frauds. Oh my. 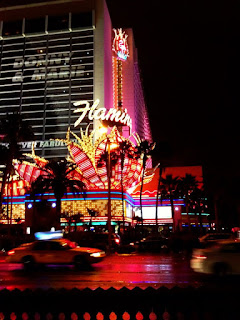 The thing I like most about traveling are the weird dreams I get fitfully sleeping in a foreign bed. And nothing shakes up the dreamworld more than the ridiculous over-stim of Sin City.

Right now, I'm sure you're all like, Oh, God, is she going to detail her dream last night? I hate that! Well, so do I. But hear me out. This one deals with something many writers face, particularly writers in long-standing writers' workshops.

In my dream, I was helping another writer flesh out an idea. The writer was this anonymous guy who tried his hand at a tropey little RomCom and was dissatisfied with it. I took a look and got all inspired and found all these ways to deepen it, strengthen it, get it off the ground. He liked the enthusiasm behind my counsel, but was all, "Nah. I think I'll just throw it in the garbage. I sort of hate the idea, anyway."

At this point I was thoroughly invested in the book. In my dream I contemplated asking him if I could steal his idea and make it my RomCom. But, even in my dream, I decided that was completely unethical, so I watched the manuscript fly off a building (similar to the Flamingo Hotel) and into the great black netherworld of aborted WIPs. I was horribly sad when I awoke. As though someone had died.

So, I guess I have a question to you writer folk. Have you ever been tempted to adopt someone's abandoned WIP? Where's the line between inspiration and thievery?
Posted by Suzy Vitello at 9:42 AM