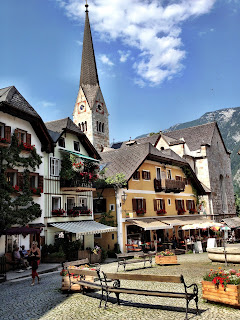 You'll be pleased to know that Kirk and I are not taking any more of Wanda's shit, and simply ignore her when she demands we U-Turn when it makes no sense what-so-ever. We talk back to her, even. We flip her the bird, and continue following our old-fashioned paper map. She's such an insistent bitch, that Wanda: "Make-a-u-turn-if-possible-make-a-u-turn-if-possible," she echoes in her robot German accent.

Shut the fuck up, Wanda.

Somehow, though, we can't bring ourselves to turn her off. It's like my son--he seems to need me to nag about not eating cereal in his room, so he can continue to ignore me and bring bowl after bowl of Honey Nut Cheerios in there (and probably, in his head, he's saying shut-the-fuck-up-mom, too).

Speaking of my son, I got like two-and-a-half hours of sleep last night worrying about whether he'd been dropped off at the right place, if he had all his equipment. I wondered if his leg had healed after the quad pull he got during his last tournament. Maybe he was sick. Maybe his dad decided he should go back to the hot springs with him instead of ODP camp. I haven't connected with him because we've put our phones in airplane mode for the trip (I just can't justify the expense, given my addictive phone use--even with the international package, it's truly ridiculously costly) - but, lo and behold, at 6:00 a.m., I got the a text from him on my WhatsApp app (which, is a must for wi-fi texting over seas).

I was thrilled to find out that, indeed, all is well and he's having a great time. His roommate is cool and, best, he and a bunch of fellow-campers chipped in to have four pizzas delivered to their dorms at Linfield, where the camp is. For a 13-year-old, that's a pretty awesome thing, ordering a pizza and having it delivered to a college dorm. Carson is in heaven. So, for the moment, I can stop freaking out.

Sleep-dep and Wanda's attempts to derail us aside, the trip from Bad Ischl to Hallstatt took only a half-hour or so, and wended along a river through the usual adorable towns to arrive at a storybook village on a lake so clear and ancient and Euro-lovely we thought we were still asleep, having a dual dream or something. We thought Partenkirchen and Bad Ischl were picturesque ... this town (which dates back to 900 BC civilization-wise) outshines them. By far.

We'd decided to come here rather late in our planning -- it's the only place on our itinerary we hadn't pre-booked a zimmer, so, chunky library version of Rick Steves Germany and Austria in hand, we bumbled our way through the village in search of one-night accommodations (on a Saturday in summer, no less. Nervy us of, I know).

The lady at the TI made a call, and then scribbled something on our map, and I navigated Kirk there with only one (okay, two) wrong turns. A charming Austrian man flagged us down, directed us to park, and then took us to this 900 square foot immaculate knotty pine cottage. With breakfast, it'll cost us 60 Euro. The place is total Hansel and Gretel, without the witch (we left Wanda in the car, still pissed off that we didn't take the U-turn).

After unpacking our overnight bags and plotting the rest of our day, we trotted down the little lane to a funicular that cranked us up a mountain to tour the Hallstatt salt mines--which was a blast. The german tour was led by a woman who supplemented her spiel with bits of broken English--telling us, at one point, that the wild enemas led the villagers to the salt. (Since I haven't taken a crap in three days, that sounded pretty good to me.) Really though, the main takeaway at the salt mines (which included a dark walk through uneven ground, sliding down a couple rails, and straddling a wooden beam that chugged us to the exit of the mine) was confirmation that in the U S of A,  our fear of impending litigation has turned us into fear-driven, over-cautious cretins, who are being systematically fleeced of our innate survival skills. There are no caution signs and warnings and diatribes and wavers in Europe as prelude to every conceivable experience. You simply hand over the dough and do the thing, using your wits, experience and common sense to keep you from stepping off cliffs and so forth.

After the salt mines, we meandered through the breathtakingly charming village, fed the swans, and plopped our butts down at a lakeside table for our Radler and Würstel.

A perfect day. Well, almost perfect. I need to sign off now and power down a third packet of Metamucil.

Tomorrow, Vienna. Where we'll be for a while.

What's app with y'all? Staying regular?

Email ThisBlogThis!Share to TwitterShare to FacebookShare to Pinterest
Labels: Hallstatt, Traveling through the Salzkammergut