It's cool to mess with Jane

If imitation is the highest form of flattery, parody must be the higher highest form. An Austen scholar, an Austen imitator, and a humorist are judging the "Write Like Jane" contest, where aspiring Jane Austen acolytes can submit 800 Austenesque words and stand a chance of inclusion in a Bad Jane Writings anthology.  Plus, there's prize money.

What is it about Jane Austen that sends readers and writers into Steampunk paroxysms?  Certainly we've all guffawed to Jane Austen's Fight Club (see video above), but did you know that there's a Jane Austen drinking game? It involves watching Austen-inspired chick flick--guaranteed blotto for the frat set.

And don't even get me started on social media profiles. Facebook and Twitter are replete with Janefaces of one sort or another. 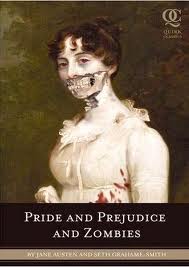 And then there's the Zombie books. It's sort of like a Saturday Night Live skit, the zombified "Pride and Prejudice."  Perhaps engineered by an app that just searches and replaces various words with "zombie."  But terribly fun to read:

"It is a truth universally acknowledged that a zombie in possession of brains must be in want of more brains.  Never was this truth more plain than during the recent attacks at Netherfield Park, in which a household of eighteen was slaughtered and consumed by a horde of the living dead."

Let's see Keira Knightley say that with a straight face!

So all you idolatrous Janeites, I challenge you, amidst your tea-cozy crochet sessions, crank out a pre-Victorian romantic gentry scene set in some cold London manse where bosoms heave and corsets pinch, and ladies are ladies, unless they are gents.
Posted by Suzy Vitello at 9:39 AM